Variable Manager can be to create and maintain profile variables.  It can be used to add new profile variables of any type to the database.  New variables are created in a draft format until the user decides they are ready to be published.  Existing variables can also be edited: the variable label and question text can be changed, and coded (categoric) variables can have codes added or removed.  All changes are made as draft until published.

Variables can also be marked as being sensitive.  The contents of sensitive variables may only be viewed by users with the appropriate security permissions.

From the Maintenance menu, select Variable Manager.  The list of profile variables already in the database will be displayed. 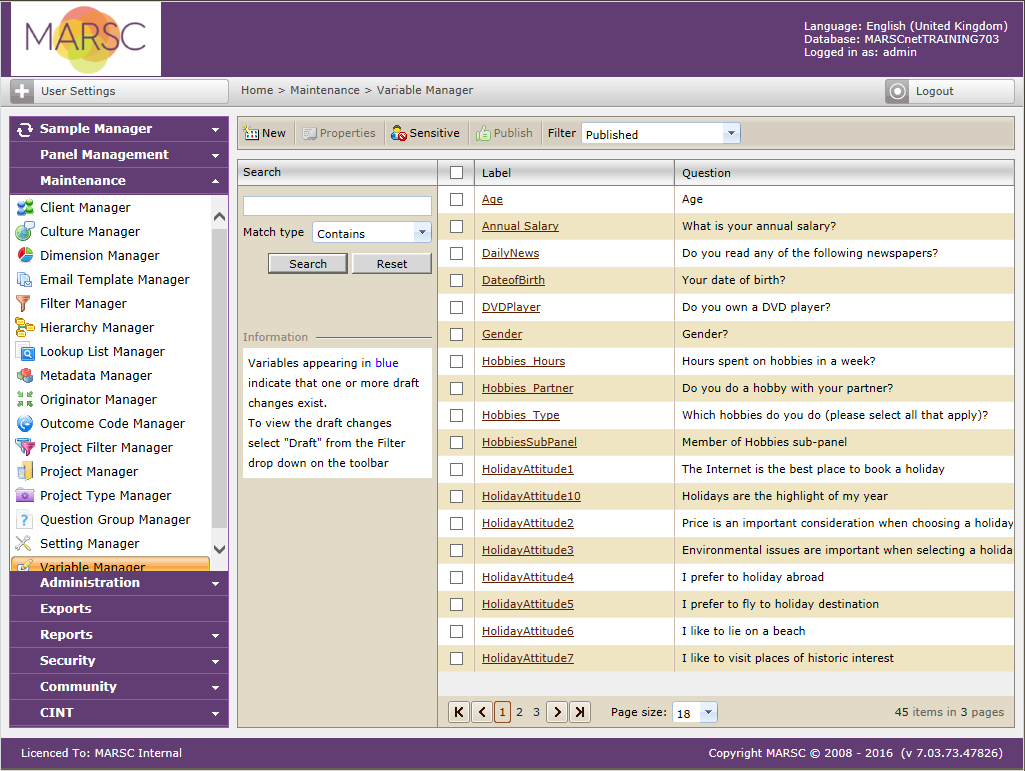 Variable Manager opens in Published mode, which shows only the published variables, i.e. those already in the database available for use.

By default, variables are displayed in alphabetical order based on the variable label.  The display order can be changed by clicking on the label or question column headers.

Use the search to search for variables.  Enter the text you want to search for, select the appropriate search type and click on the Search button.

To see draft variables (if there are any), change to Draft mode by selecting Draft from the Filter dropdown list.

Click on a variable (either published or draft) to see its definition. 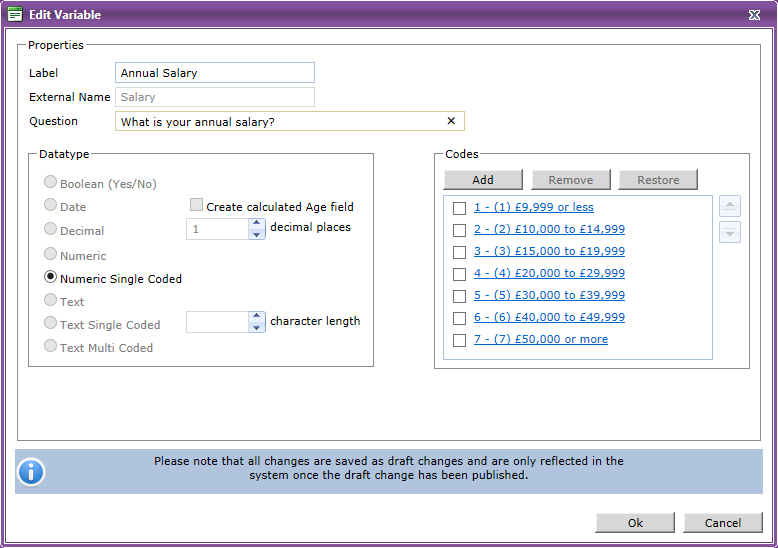 Variables have the following properties:

There are several possible datatypes that can be used to define a variable in Q_Panel:

Note that when multi coded variables are imported using Data Import, the triple-s definition standard requires that the codes start from 1.  Q_Panel actually stores the code values starting from zero.  Variable Manager shows the codes as they are stored in Q_Panel.

To create a new variable click on the New button in the toolbar to open the New Variable (Draft) dialog. 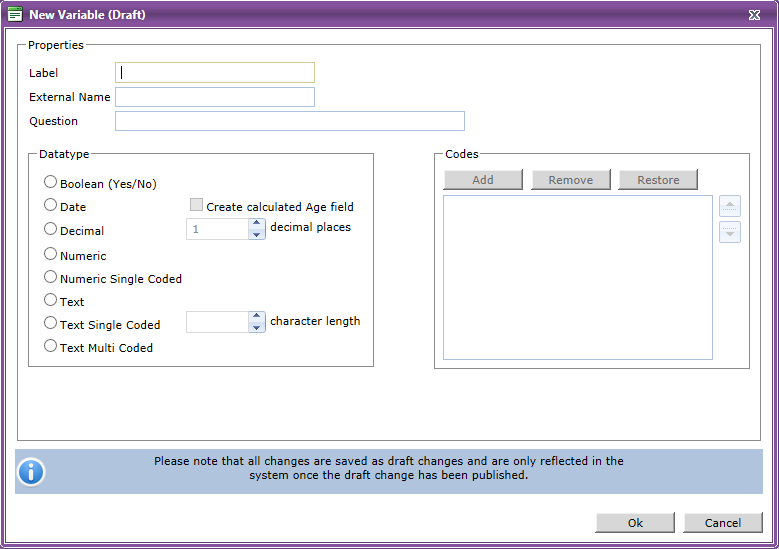 Enter the properties of the new variable. If the variable is coded, the Codes section will become enabled and one or more codes may be added using the Add button.

The new variable will only appear on the Variable Manager screen when in Draft mode, along with the changes to any other variables that are still draft.

To publish a variable, select it by clicking on the checkbox next to its name and clicking the Publish button in the toolbar.  You can only publish one variable at a time.

When publishing a variable for the first time, you will be asked to select a folder in the hierarchy where it should be placed. 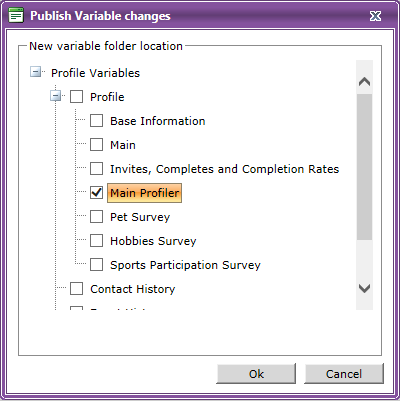 When publishing a variable that already exists, the existing variable in the database will be updated with the changes.

To re-locate a variable after it has been published use Hierarchy Manger.

To delete a draft variable, select it by clicking on the checkbox next to its name and clicking the Delete button in the toolbar.  The draft variable will be removed permanently.

Published variables can removed or hidden from use by unchecking availability options within Hierarchy Manager.

For example, if the Annual Salary variable is edited, in Published mode it will be displayed as follows:

In Draft mode, the new version of the Annual Salary variable appears, waiting to be published:

It is possible for there to be more than one draft version of a variable, therefore care should be taken that the correct one is published.

To edit an existing variable, select the variable from Published mode.

The Published view always shows the variable definition as it is in the database.  If changes have already been made to the variable but not yet published they will be found within the draft view.

The variable label and question can be edited, but the external variable name cannot be changed.

Add new codes by clicking the Add button and entering the new code and description.  (When adding numeric single coded or multi coded variables, the code value will default to the next value in the sequence.  This can be changed if required).  The character length of multi coded variables will be updated automatically if new codes are added.

Remove codes by clicking the checkbox next to the required code and clicking the Remove button.  The code and description will display in red to show that it has been removed.  Removed codes will not be permanently removed from the system, but will no longer appear as a possible answer when used as a question in a Q_Community profiler. 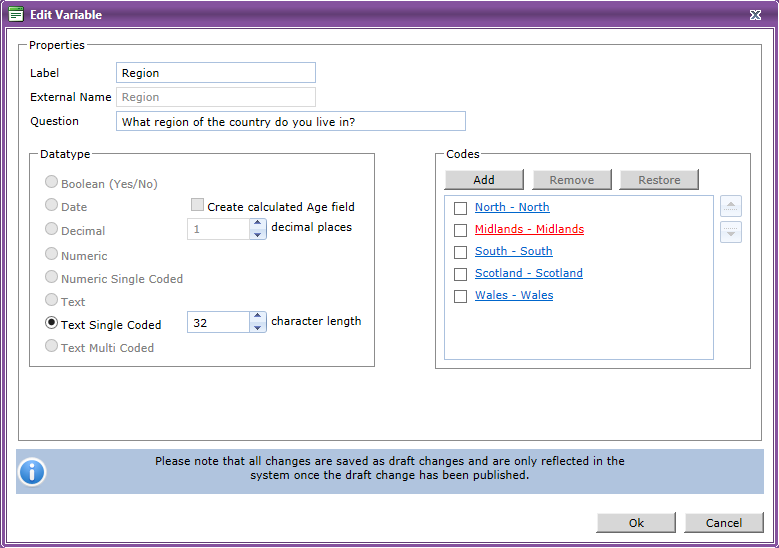 (If the code has not already been saved by pressing OK, the Remove button will remove it permanently).

Restore a removed code by selecting the checkbox next to the required code and clicking the Restore button.  The code will display in black again, and will be available as a possible answer in a profiler again.

To change the order question codes are displayed within a profiler (and throughout Q_Panel), use the Sort buttons on the Codes section of the Edit Variable dialog.

Select one of the codes by ticking the checkbox next to its name.  The sort buttons will become enabled.  Use the buttons to move the selected code up or down the list of codes.

This will change the order the codes are displayed. 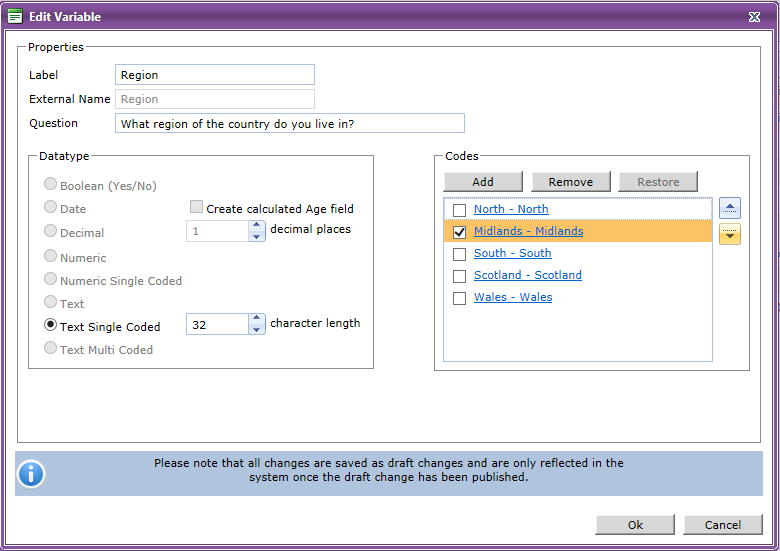 Once you are satisfied with the order click on OK to save the changes.

Remember, before variable changes are made available in Q_Panel they must be published.