Hierarchy Manager allows the user to customise the hierarchy of folders and variables and specify where they may be used within Q_Panel.

From the Maintenance menu, select Hierarchy Manager.  The folders of variables already setup in the system will be displayed under the top level folder called Profile Variables.  Expand this to see the sub-folders. 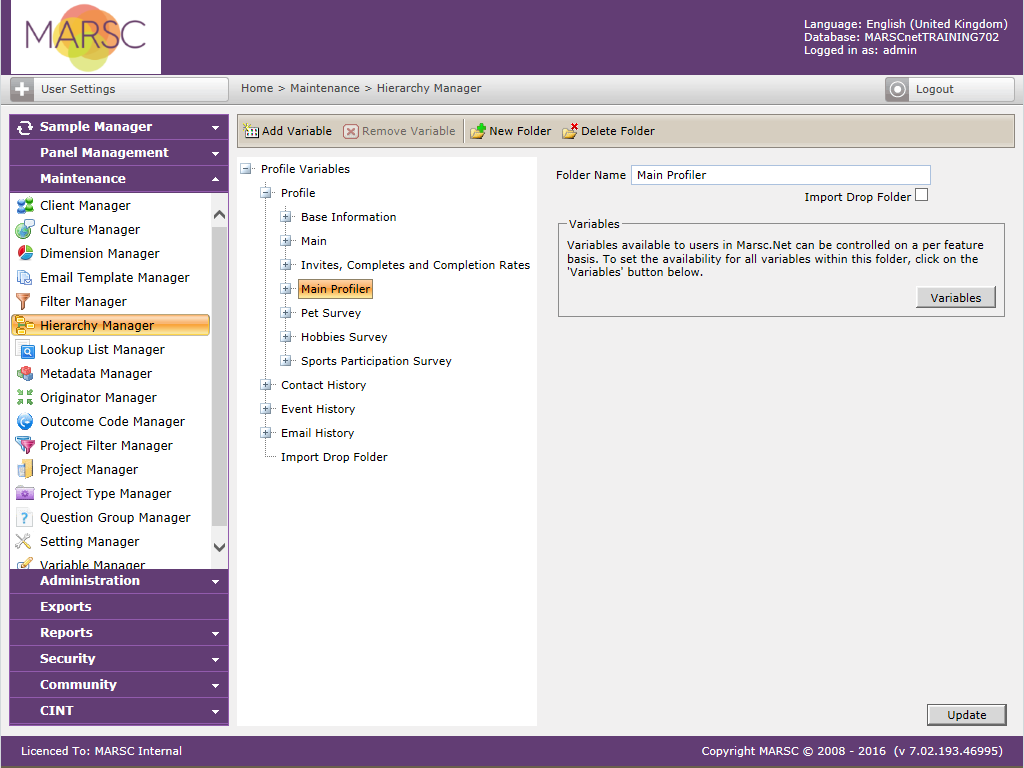 To define the availability filters for all variables in a folder, select the required folder and click on the Variables button. 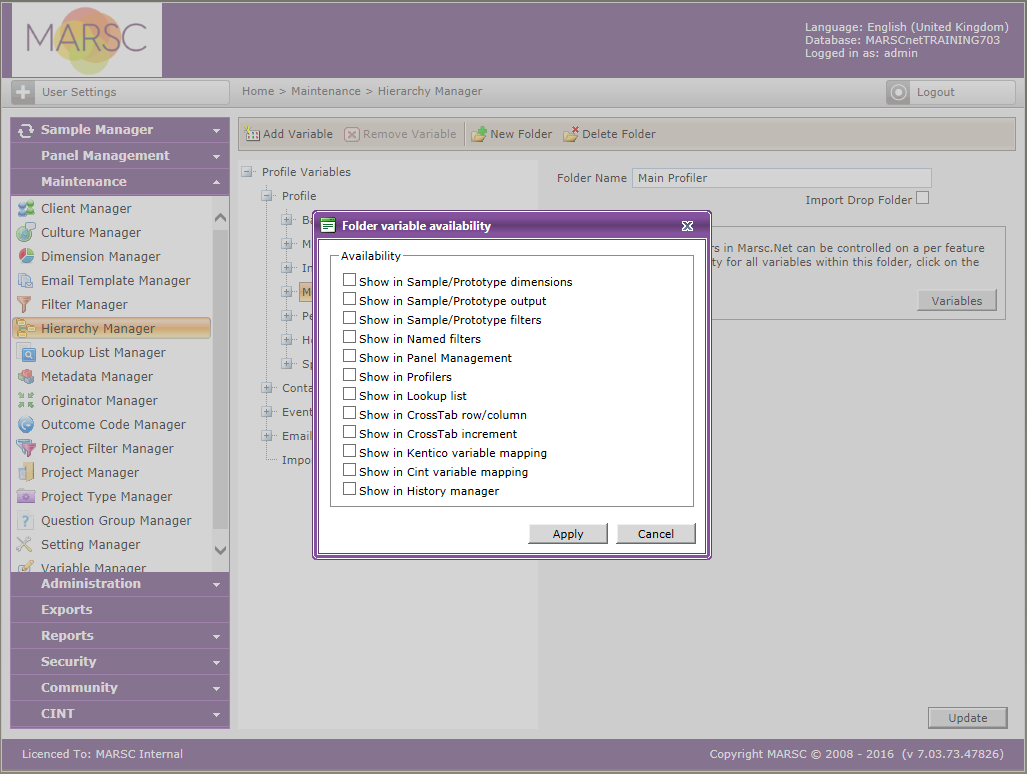 Check the options that are to apply to all variables in the folder and sub-folders and click on Apply.

To define the availability filters for a single variable, select the required variable.  The existing availability options for that variable will be displayed. 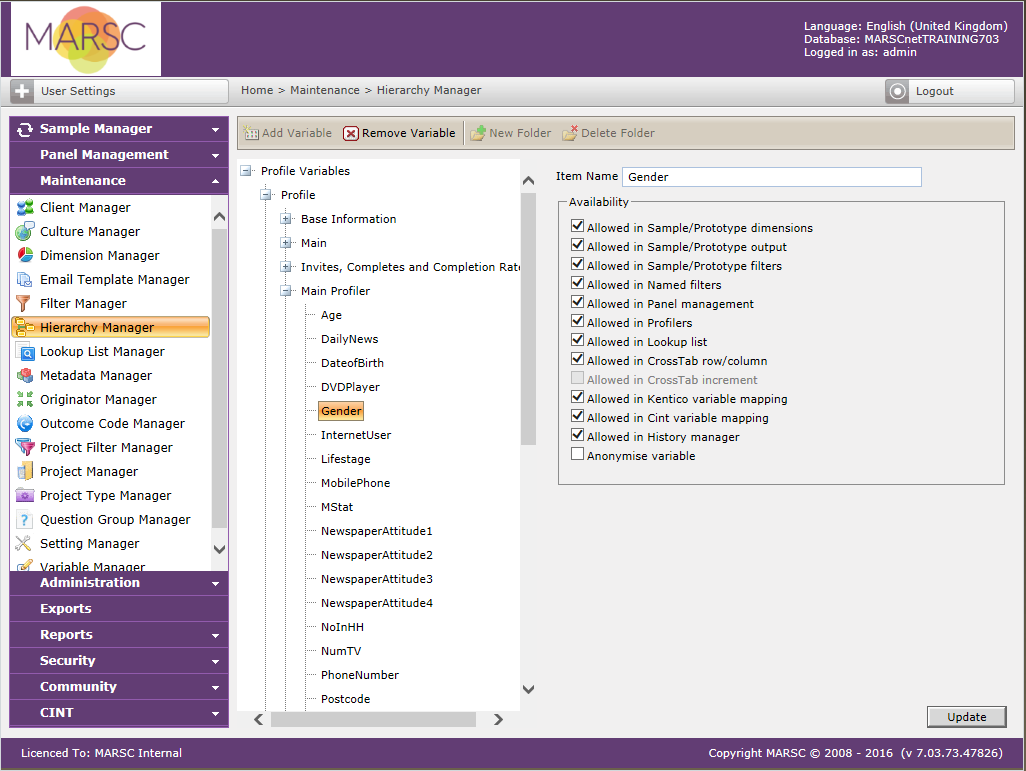 Check or uncheck the options as required and click on Update to save the changes.

Some of the availability options are disabled for Q_Panel system variables to prevent them being overwritten or used in an inappropriate way.

There are twelve availability filters that can be set for variables.

The Anonymise checkbox can only be applied to individual variables, so does not appear when a folder is selected.  If the settings for a folder are changed, the original Anonymise variable setting will not be affected.

Click the Update button to save whenever a change is made to the availability filters for a variable.  This must be done for every variable that is changed.

To rename, select the required folder and enter the new folder name.  Click on the Update button to save changes.

Moving a folder or variable

Variables can also be repositioned within a folder using drag and drop.

To add a new folder, select the folder that you want the new folder to be added to and click on New Folder from the toolbar.  The Add Folder dialog will be displayed: 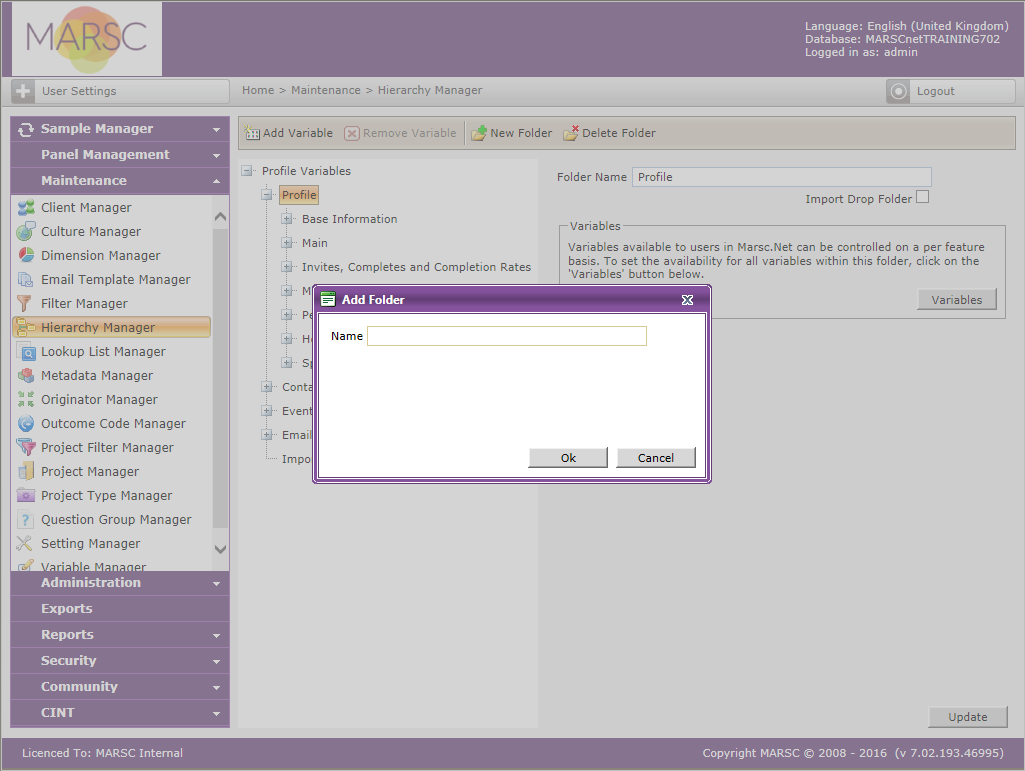 Give the folder a name and click OK to save.  The new folder will appear within the selected folder.

To delete a folder select the folder to be deleted and click on Delete Folder from the toolbar.

Folders must be empty before they can be deleted.  Empty the folder by moving the variables into another folder or by removing each variable.

To add a new variable, select the folder that you want the new variable to be added to and click on Add Variable from the toolbar.  The Select Variables dialog will be displayed showing two top-level folders.  One folder contains Q_Panel system variables, and the other contains user-defined profile variables. 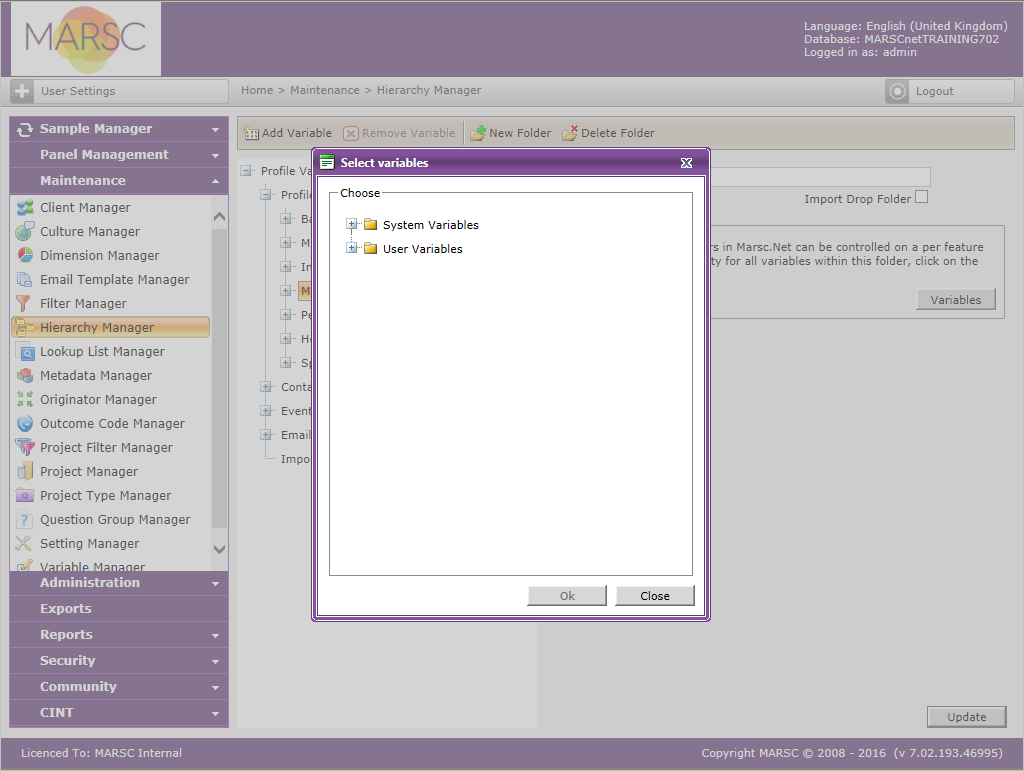 Expand the folders, select a variable from the list of variables in your database and click OK.  The new variable will appear within the selected folder.  You can then edit the availability filters for the new variable.

By default, variables added in this way will have all the availability filters ticked, with the exception of Anonymise.

Alternatively, variables can be hidden from use by unchecking availability options.

When variables are added using the Q_Panel Data Import service, they will be added within the folder that is defined as the Import Drop Folder. 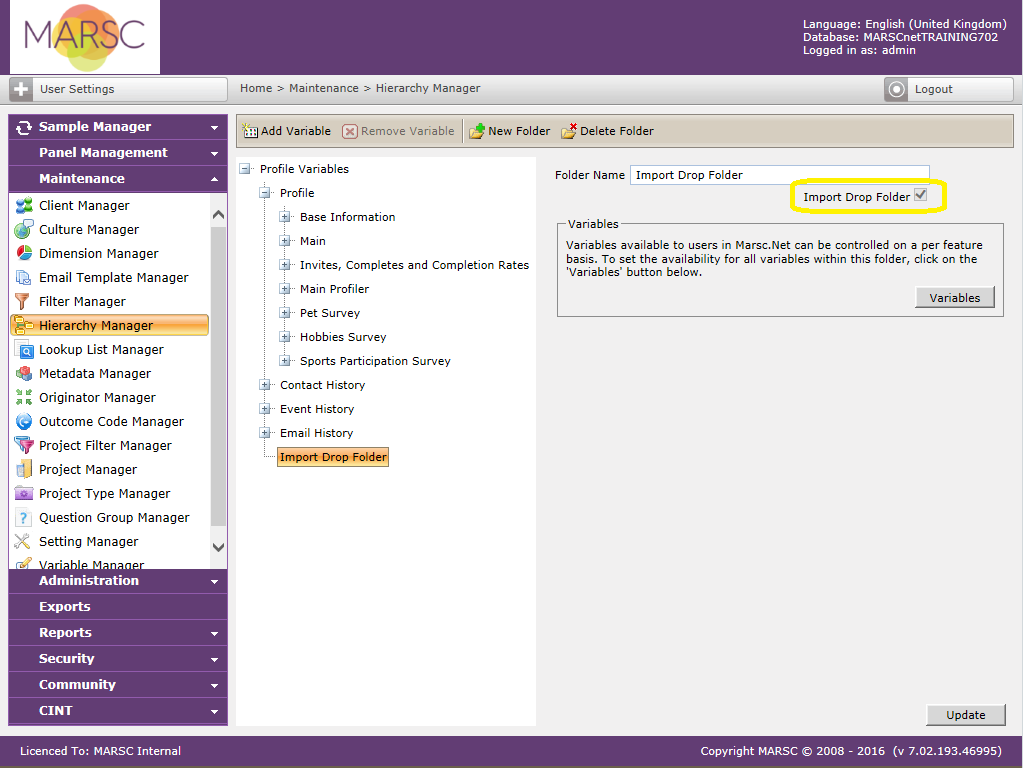 Variables imported using Data Import will be placed into a sub-folder of the designated Import Drop Folder.  They can be left there or moved to another folder as required.  By default, variables imported will have all the availability filters ticked, with the exception of Anonymise, so will be immediately available for use in samples and throughout Q_Panel.

The name of the new sub-folder will depend on the values in the Data Import configuration files.

Importing variables to an existing folder

If the imported variables are to be added to an existing folder, then set the Import Drop Folder to the higher level folder and ensure the Data Import configuration and Triple-S definition file are set to use a folder name which already exists within the designated Import Drop Folder.

For example, to add imported variables straight into the Profile/My Profiler folder.  The Profile folder should be set as the Import Drop Folder within Hierarchy Manager, and the Data Import configuration and Triple-S definition file should be set to My Profiler.